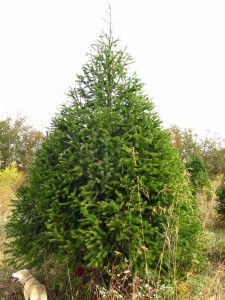 Despite their name, Douglas Fir are actually not considered to be true Firs. However, they have many of the same pleasing properties as Fraser Fir and other Firs, such as strong branches and a naturally pleasing shape. Though still poor at retaining their needles after being cut, they are nonetheless better at this than the true Firs. Also, Douglas Fir have a stronger aroma than the true Firs, but less than Spruce. Some botanists have described the aroma as “sweet” or “smelling of camphor.”